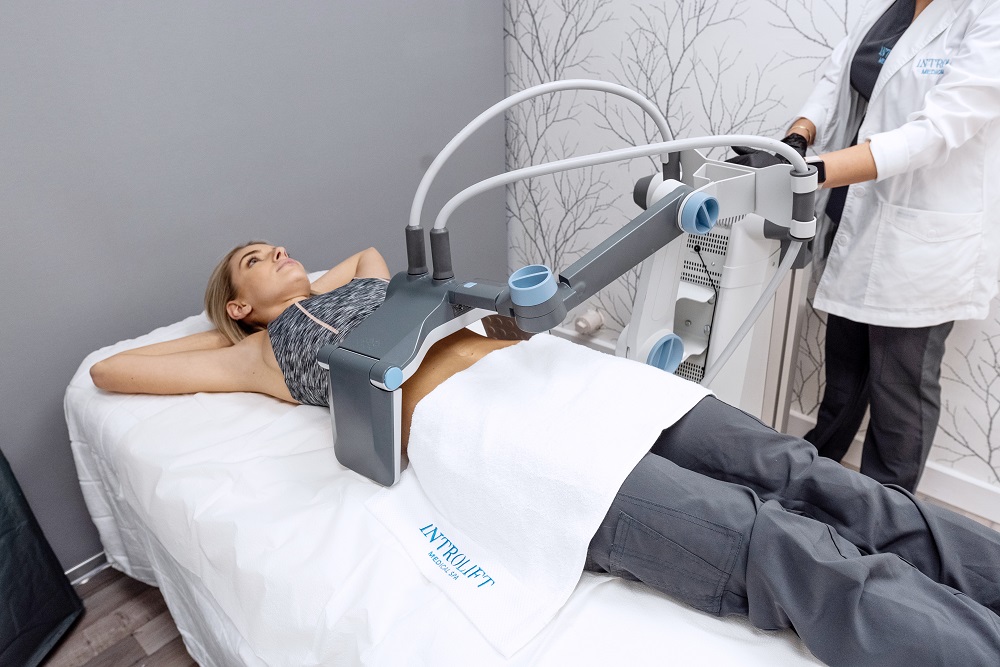 Looking for a way to permanently eliminate areas of fat from your body?

You have two main options – BTL Vanquish or Coolsculpting.

Can’t decide which one to go for?

Here is the lowdown on both treatments, which should hopefully enable you to make the best decision for your body.

WHAT IS BTL VANQUISH?

BTL Vanquish is a non-invasive procedure that makes use of radio frequency technology to destroy the fat cells that lie beneath the skin.

Wondering how it actually works?

A device that emits radio frequency waves, as well as heat, is held about an inch or so above the targeted area of skin. The waves that are released by the device target fat cells and heat them up to around 120 degrees, causing a significant amount of damage to the cells.

This then results in cell death, which is also known as apoptosis.

The BTL Vanquish device is sophisticated enough to monitor your fat tissues while treating them. It then adjusts its energy output based on this.

How long does it take for the fat cells to die?

This depends on the individual cells. Some cells will die immediately after being heated up, while others can take a few weeks.

So, what happens to the fat cells once they die?

Your lymphatic system will filter these away, passing them through to your liver after which they will be eliminated from the body through urine.

Do the fat cells ever come back?

In most cases, no. Fat cells do not usually regenerate. Although they can swell up or shrink down depending on weight fluctuations, the number of cells themselves don’t change.

This means that once you destroy your fat cells with BTL Vanquish, or with Coolsculpting, the results are usually permanent.

The main concept behind BTL Vanquish and Coolsculpting is quite similar – technology is used to destroy fat cells so that they can then be naturally eliminated from the body.

While BTL Vanquish makes use of heat to kill fat cells, Coolsculpting goes in the opposite direction. This procedure makes use of cooling technology to freeze the fat cells in order to kill them.

Although Coolsculpting is also a non-invasive procedure, the applicator used for this treatment is placed on the skin so that its vacuum technology is able to pull the fat cells up so that they lie in between the applicator’s cooling panels. This means that there is quite a bit of physical contact between the applicator and the skin, while BTL Vanquish is completely contactless.

BTL VANQUISH VS COOLSCULPTING: THE PROCEDURE

The differences between the two fat reduction procedures have already been briefly touched upon, but there are a couple of other points that you should know about…

The device used for BTL Vanquish is quite large, and can cover the whole abdomen, as well as the sides and front, all at the same time.

On the other hand, Coolsculpting can only treat a very small area of skin at a time. The applicator targets a specific area, and then needs to be left on the skin for about an hour. Each session will target a different part of the skin, meaning that it could take about six treatments before the whole abdominal area has been worked on once.

BTL VANQUISH VS COOLSCULPTING: THE COST

With Coolsculpting generally requiring more time spent being treated, you are likely wondering what the price difference

The way in which Coolsculpting needs to draw the fat cells up between its panels means that this procedure is only really suitable for those who have fat that is protruding out from their body, meaning fat that you can grab on to and hold.

On the other hand, since the BTL Vanquish device is held slightly above the skin, even smaller areas of fat can be targeted.

Well, with BTL Vanquish, the heat being emitted from the device onto the skin results in quite a pleasant, warming sensation. Many patients equate this feeling to that of having a heat pad placed onto their skin.

On the other hand, the fact that Coolsculpting makes use of such low temperatures, and has direct contact with the skin, means that the procedure can be a little uncomfortable.

BTL VANQUISH VS COOLSCULPTING: THE RESULTS

The main question that you probably have right now is…

What’s the difference when it comes to the results that both of these procedures produce?

Well, let’s begin by looking at how many treatment sessions you need from each procedure in order to actually see results…

Since the BTL Vanquish device can target quite a large area of skin, it usually takes between four to six weekly treatments to target an area the size of the abdomen.

How long does each BTL Vanquish treatment take?

This depends on the area you are treating, but average treatment times are:

How about for Coolsculpting?

Coolsculpting can only treat a small amount of skin at a time.

This means that, for the area the size of the abdomen, the procedure requires about four to six treatments, each one on different parts of the abdomen. These treatments usually take an hour each, but all of them may need to be repeated up to three times.

You are probably wondering… 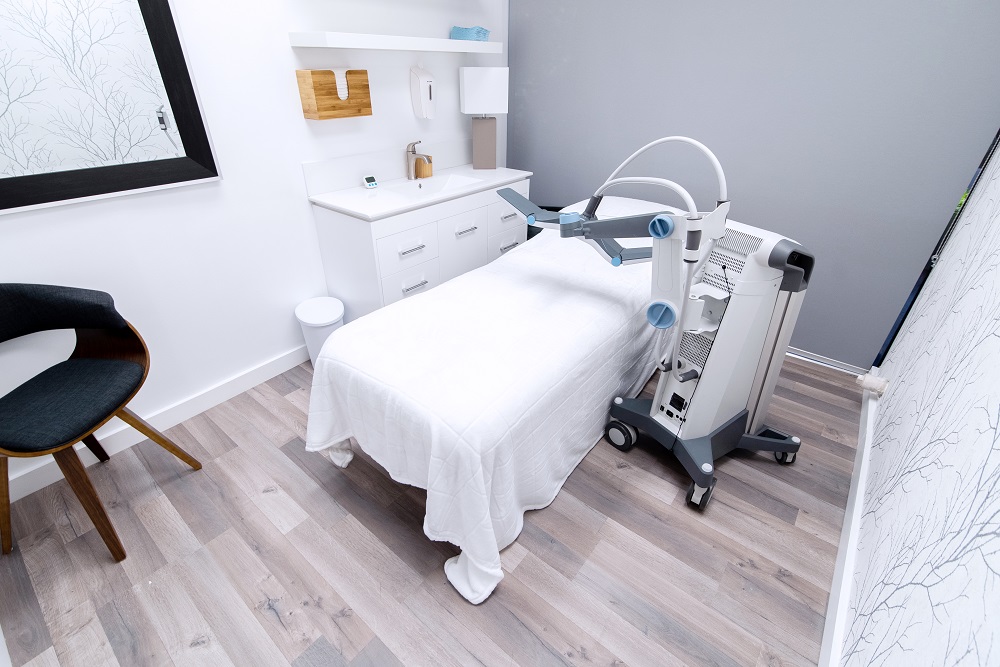 Once the full treatment schedule has been carried out, how long does it take for final results to be visible?

As mentioned early, with BTL Vanquish, some fat cells will die off immediately after being heated, meaning that some patients will notice results pretty much instantly. These will then improve over the next several weeks.

On the other hand, results from Coolsculpting take longer to become noticeable. In most cases, it takes three to four months to see the final results.

Of course, there are ways in which you can speed up results…

Begin by increasing your water intake, not only before each of your treatments but also afterwards. Keeping your body moving after your treatment is over can also help to boost results.

Because both water and movement help to stimulate the lymphatic system, meaning that it will do a much better job of flushing the broken down fat cells out of your body.

The extra water will also help to keep your skin better hydrated. This means that the both of the treatments will be able to target your fat cells more effectively.

Want to know what the actual results are like?

It basically means a reduced thickness in the fatty layer of the skin that has just been treated. Research shows that, at least for BTL Vanquish, the loss in weight that the fat reduction causes is something that most patients are able to sustain over the long term.

In addition to being able to destroy fat cells, the heat produced by the BTL Vanquish procedure also has a skin-tightening effect. Some research also suggests that collagen regeneration takes place after a radio frequency treatment such as BTL Vanquish, enabling the skin to take on a more youthful appearance.

BTL VANQUISH VS COOLSCULPTING: SIDE EFFECTS

Although both fat reduction procedures and completely non-invasive, you are probably still wondering if there are any side effects to their of them…

Well, with BTL Vanquish, there are not really any side effects. This procedure requires zero downtime, meaning that you can get back to your daily routine immediately after each treatment.

The only thing that you may notice during your treatment is that your skin turns slightly pink from the heat, and you may even end up sweating slightly. However, this is easily fixed by having the device repositioned. Since BTL Vanquish treatments are closely monitored, the person carrying out your treatment would be on hand to wipe away any sweat that may form on your skin.

BTL Vanquish patients also receive a safety cord during their treatment. If they experience any discomfort, they can use this cord to turn off the device, without the need for a technician.

There are a couple of Coolsculpting side effects worth knowing about:

● Nerve Pain – while the Coolsculpting procedure only targets fat cells, leaving your muscle cells alone, some of the nerves in the treated area can also end up frozen. This can then lead to nerve pain, and while this can be uncomfortable, it will usually resolve on its own after a few weeks. In some cases, it can take a few months for this to disappear
● Paradoxical Adipose Hyperplasia (PAH) – this complication refers to the sudden growth of fat tissue and cells in the areas that surround the part of the skin that has undergone the Coolsculpting procedure. This doesn’t happen immediately – it usually takes a few months after your very first treatment for PAH to manifest. When it does, Coolsculpting is not able to destroy the new fat cells, as these tissues are quite abnormal. Liposuction has also not been successful at this, meaning that your only option would be surgical excision

between both procedures are…

Well, generally, both procedures cost around the same.

This makes both BTL Vanquish and Coolsculpting quite cost-effective when compared to other fat reduction procedures.

Many treatment facilities, including the Introlift Medical Spa (which provides BTL Vanquish rather than Coolsculpting), offer a package of treatments that enable you to save quite a bit of money when you book four sessions in one go.

CAN ANYONE UNDERGO BTL VANQUISH AND COOLSCULPTING?

As mentioned earlier, Coolsculpting requires a protruding amount of fat in order for the treatment to work. However, it does only treat very small areas of fat at a time.

This makes the treatment best suited for people who are already relatively close to their ideal weight, but who are looking to treat areas that other fat reduction methods don’t seem to have an effect on.

BTL Vanquish is more universal. So long as you are an adult and are at a relatively healthy weight, this treatment is fantastic for targeting any unwanted fat around your body.

However, note that both treatments are best avoided if you are either pregnant or breastfeeding.

COMBINING BTL VANQUISH WITH OTHER TREATMENTS

Since the BTL Vanquish treatment is not only completely non-invasive, but also does not require any direct contact with the skin, even better results can be experienced by combining BTL Vanquish with another treatment.

Which other treatment would you go for?

One of the most successful combinations at the Introlift Medical Spa is BTL Vanquish combined with the Introlift RF Body Sculpting.

What does the Introlift RF Body Sculpting do?

This is another treatment that heats up and breaks down fat cells, but has a few other benefits too…

Since the device makes use of mechanical rollers, this treats the skin to a massage while the rollers smooth out the area that is about to be treated.

While the BTL Vanquish device is best used on the flanks, stomach and thighs, the Introlift RF Body Sculpting is extremely effective at targeting the arms, neck and buttocks, meaning that your whole body can enjoy the effects of radio frequency technology.

Disclaimer: this blog article is for informational purposes only. It is not intended to be a substitute for professional medical advice, diagnosis or treatment. Always seek the advice of your physician or other qualified health care provider with any questions you may have regarding a medical condition or treatment and before undertaking a new health care regimen, and never disregard professional medical advice or delay in seeking it because of something you have read on this website.